Next we explored the northwestern tower. The door was locked. There were some carvings on the door that looked Elvish in nature. The upper reaches of the tower were shrouded in vines from the forest canopy. While we were looking at these vines they started to move! It turned out that these were assassin vines. 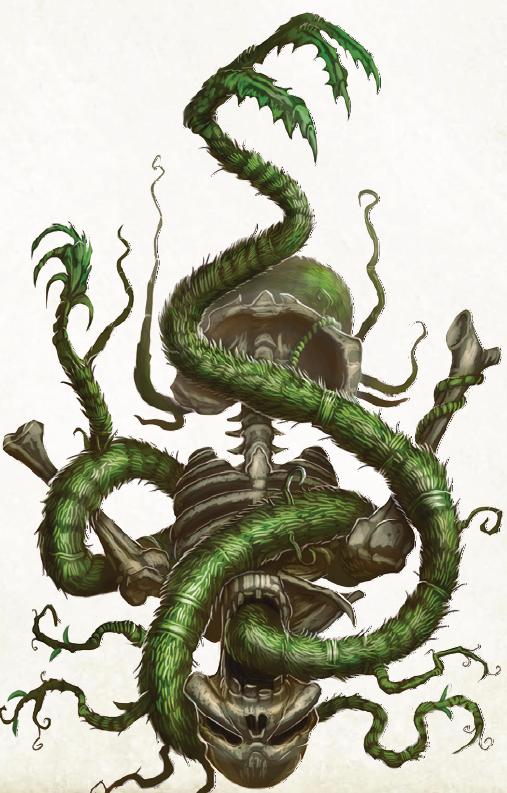 We were able to pretty easily kill the vine, but we did take a few hits during the fight. Our cleric was nice enough to get us all healed up. Then the fighter smashed open the wooden door with Elvin carvings before anyone could stop him. There were some more vines inside the tower walls, we immediately got into a defensive position in case they decided to attack. Luckily for us it turned out they were not going to kill us.

While we were distracted by the vines (that turned out to be fine) our fighter was attacked by some weird looking mutant Elf creature. I later learned that this creature is called a Grimstalker. 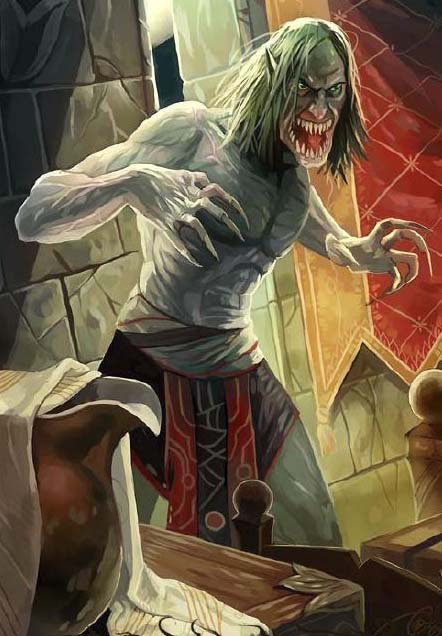 He got such a huge sneak attack off against our fighter that our fighter was damn near killed in 1 blow. The rogue went after him while our bard started doing his magical singing that makes us all stronger. I managed a hit off on this creature, but just barely touched him. Our cleric was able to get some healing done on our fighter. He was still looking pretty beat up, but the majority of the blood loss was curtailed. The rogue and I managed to get a few more hits in each. He was very difficult to get a hit off on him. He moved quite fast. Finally I was able to catch him off guard and got a reallyÂ good hit in on him and killed him.

We found a chest hidden in the back of the room. Our rogue picked the lock on the chest. We found some pretty awesome bling inside. We decided it was a good time to take a break. Skoll (my wolf) guarded the entrance, while those of us who don’t need a full nights rest to get back our magic took turns on guard duty. After my guarding time frame was over I took an hour to meditate so I could replenish my own spells, and then got some sleep.

We also went and fully explored the previous tower that the quickling and come from. He apparently liked to scalp his previous victims, as we found a number of scalps nailed to the wall. We managed to find a few gems and a little bit of gold in his tower as well.

We went for the third tower and found a lot of organic refuse. There were a few rats chewing on human flesh that scurried away from the light when we entered. Then all of a sudden we saw the rats coming back. There were a whole lot more of them. The rats were just pouring out of cracks in the walls and ground. It looked to be several rat swarms.

I was able to use my shield to basically smash the rats in between my shield and the ground. This was pretty effective in killing them, but there were just SO many. I called Skoll into the room once I had the swarms distracted and on me, and he was able to bite them and rip their heads off. There were so many that when I was smashing my shield into the ground it was coming back up completely covered in blood, with rat bodies impaled on my shield spike. I was able to do considerably more damage to the rat with my shield than the others in my party were with their weapons.

While the rogue, fighter, Skoll and I were doing battle with the rats our cleric was sitting outside saying “forget that, im not going in there, there’s RATS!” Our bard stayed outside to keep her company, but he did also keep up his magical singing, which helped quite a bit with the killing of the rats. (I think he was also helping the cleric appraise one of the rings that we had found in the quicklings loot.)

We finally killed off the last of the rats. The fighter then proceeded to take a lot of rat blood and guts off my shield in his hand and smear it all OVER our clerics dress. She was PISSED at him, while the rest of us were laughing. Lastly we explored the last tower on the outside edge of the keep. It contained some trinkets, as well as a statue of a god that I’ve not heard of before.

Finally we got to the inner tower of the keep. We went up the stairs and came across an elven woman at the top of the stairs. The elf woman started dancing and we all became dazzled by her dance steps. There was some serious magic going on there. Interesting side note, our cleric is a lesbian, so even she was dazzled by this woman’s dancing. The dancing was so good that none of us were even able to move.

She started playing really close attention to our bard (a half elf). She seemed to be very attracted to him. Our cleric offered up our bard in trade for letting us go. While amusing to the rest of the party, the dancing elf lady just ignored us and kept grinding up on the bard. The dancing elf lady then actually tried to tackle our bard, while at the same time reaching for the lace at the front of his pants. While disturbing to see, she finally stopped dancing and we were able to attack her. We started landing blows against her, and she seemed to be trying to bite the bard on the neck while still fumbling at the front of his pants.

The bard later said it felt like all the energy was being drained from his body when she was doing that. After another few attacks with some stops in there for us when she started dancing to distract us again we were finally able to kill her. It did however take a lot longer than it should have.

After killing her, and looting her house for every bit of loot we could find we headed back to town. Upon arriving I felt much stronger than I had previously. I also noticed that Skoll looked considerably stronger as well. (I’ll metgame here for a moment and let you know we leveled up).

I also found out from Oleg that my new magic bashing shield had come in. It is a much tougher shield and looks like it will do a lot more damage to my enemies.